I am used to seeing the anti vaccine movement talking utter nonsense but I am disgusted reading recent posts which have been circulating on Facebook from a woman called Adele Allen.

Allen is based in the UK and is known for her alternative lifestyle.

Allen was interviewed last year on the ‘This Morning show’

She thinks the body can ‘self heal’ with the support of herbs and supplements.

She encourages her children to be barefoot, this worries me especially regarding Tetanus, Allen’s children have not been vaccinated.

You can watch Allen and her partner being interviewed here.

The post Adele Allen shared highlighted the terrible terrorist attack which occurred in London last Saturday the 3rd of June.

The post also spoke about the ‘International Vaccine Injury Awareness Day’ protests which took place on the same day.

Adele Allen basically implied that the terrorist attack was deliberately carried out to divert public attention from the anti vaccine protest. 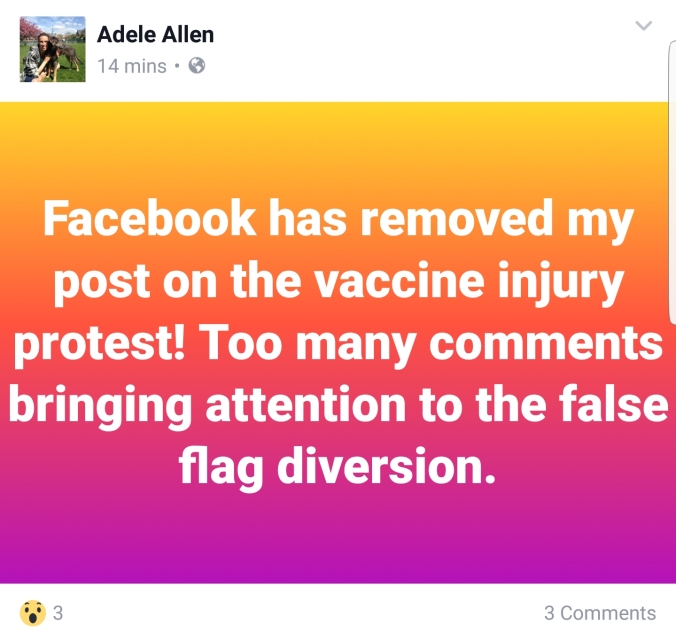 This did not stop Allen from posting more vile comments, see below.

I am used to conspiracy garbage but this really enraged me.

How could someone do this, a Mother?

This attack was carried out by extremists, terrorists.

Adele Allen has taken this vile attack and turned it into conspiracy claptrap in a bid to promote the anti vaccine cult!

It is truly despicable behaviour and a new low for this cult.

She stood by her vile posts.

She said the terrorist attack in London was probably the handy work of the Government and ‘BIG PHARMA’ combined.

She told me she does not vaccinate her children and uses herbs and wild foods to manage everyday health complaints.

She does not offer pain killers to her children or fever reducing medicines, she uses alternative products like Vitamin C instead.

Her two young children are on a Vegan diet.

Allen says vaccines do not work and believes that contracting childhood diseases will help build resistance to chronic diseases and Cancer later in life.

She admits that she has no medical qualifications and calls herself self-researched.

She suggests that I read up on VAXXED and also promotes ‘The Truth About Vaccines’ documentary.

She says metals and toxic load from Mothers can cause Autism and promotes Chelation.

Chelation has killed children, including a five year old Autistic child in 2005.

She says that she uses Turmeric as a pain killer for her family.

Please see screenshots of this conversation below. 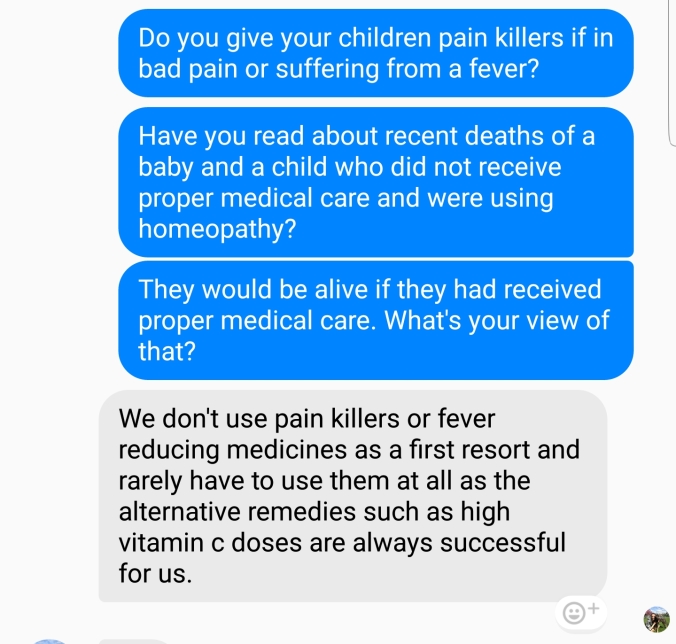 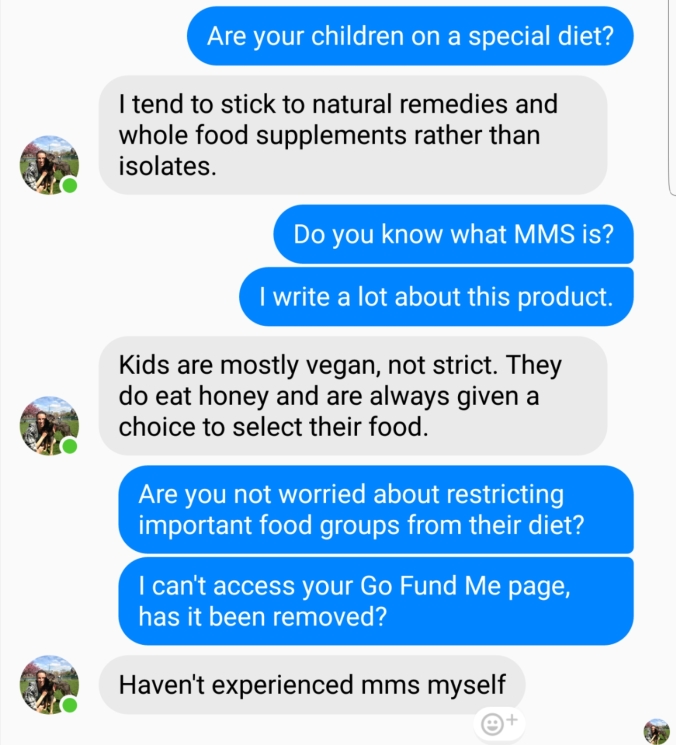 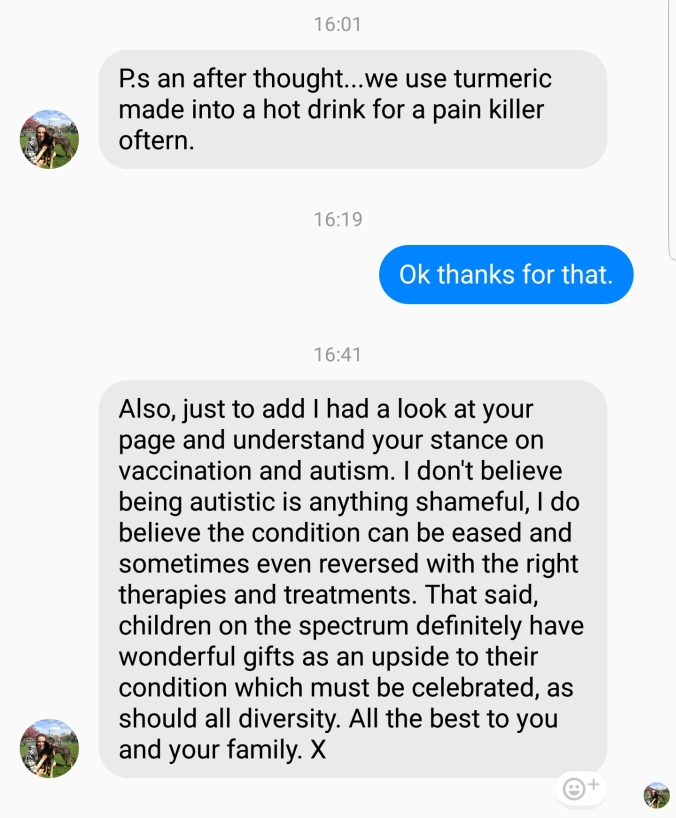 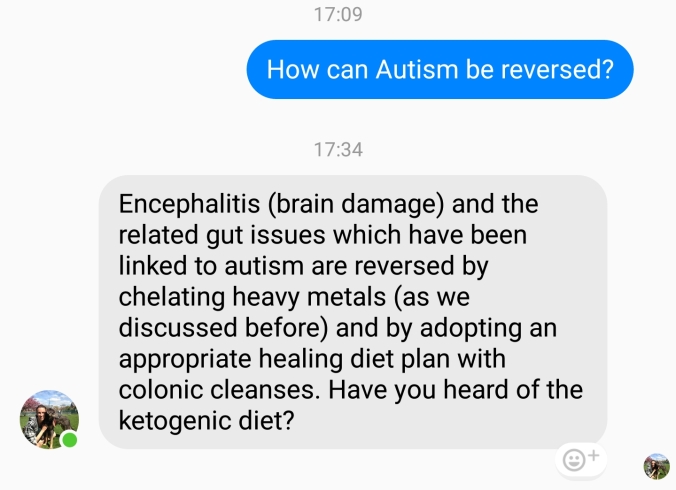 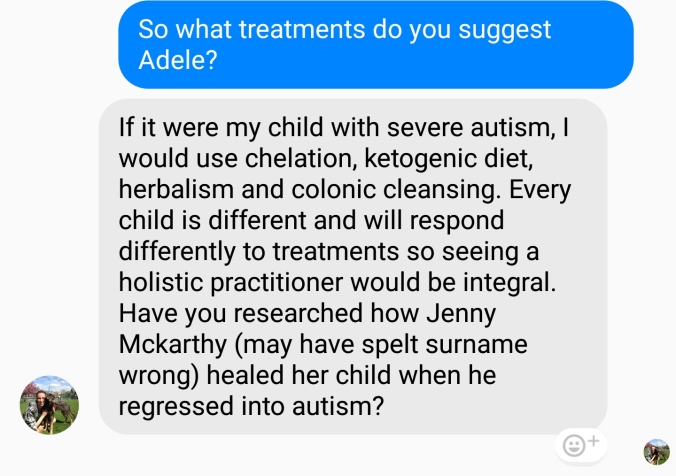 Adele Allen is a prime example of someone we campaign against.

People like her are causing grave harm, spreading misinformation and pseudoscience.

Adults can take risks with their health, but when I see these quacks inflict this nonsense on children it makes my blood boil!

Children are not accessories for parents to exploit and experiment on.

We need stronger legislation to stop the quacks and anti vaccine cult from hurting our children.